We use cookies Google Analytics for measuring traffic and making your browsing experience better.

History of our Academic Grammar School, one of the oldest grammar schools not only in Prague, but in the whole of Central Europe, started in 1556. The school´s chronicles are rich with their signicant events of our nation and remind us of the names of several luminaries intertwined with those events and our school: Josef Jungmann, Václav Kliment Klicpera, Josef Kajetán Tyl, Jan Neruda, Vítezslav Hálek, Bedrich Smetana, Jan Masaryk, Jaroslav Heyrovský (Nobel Prize laureate), as well as contemporary personalities such as Jan Hrebejk, Petr Jarchovský, and Petr Šabach. Prof. MUDr. Josef Koutecký, DrSc. has paid tribute to “his” school several times. 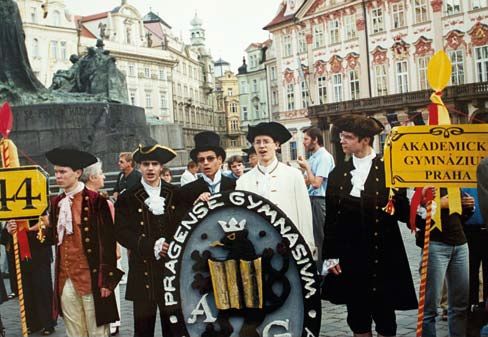 The attribute “academic“ in the name of the school reflects the reality that our establishment was formed from lower forms of the Jesuit University - Academy. Moreover, it evokes the historical privilege of the enrolment of the students from the final forms in Prague University. After the February coup d´état in 1948 the grammar school lost its title consecrated by centuries to turn into an eleven-year (from 1953) and later (1960) twelve-year comprehensive secondary school. The introduction of specialized forms that were taught Latin and Greek and an experimental renewal of the eight-year grammar school in 1968 were a harbinger of better times. The August occupation with the Normalization that followed, however, brought about the abolition of the lower forms. The grammar school could not officially ask for its historical name until after the Velvet Revolution - in 1990.

What is unique about our heritage is that AG has communities of graduates not only in many countries but on all continents. Wherever they have been, they have excelled in many areas of human striving. In their letters and memories, they often return to “their Academy” with gratitude.